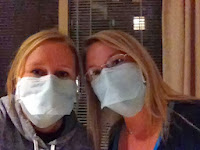 For the last couple of weeks I've been dealing with a middle and inner ear infection. The doctor says is could be a side
effect of the IVIG, which I wouldn't be surprised since I seem to have gotten every other side effect of the treatment thus far.

It's been especially tough since I had the infection over the Thanksgiving holiday. I haven't really been able to chew or really close my mouth all the way. Tough.

As far as seizures go, I've had just a couple since my last post, one being just minutes ago. It seems as though I get the urge to write just after I have a seizure. Seems appropriate.

The Thanksgiving holiday was great, despite being sick, my family always finds a way to have a good time. Here in the US (to all of my foreign friends), we have a huge shopping day just after Thanksgiving called Black Friday. This year Black Friday started early, on Thursday, Thanksgiving night. It was awesome just to see all the crazy people in the stores searching for "deals."

On the Wednesday before Thanksgiving my sisters and I stayed up until midnight because we knew that most of the online deals would start the minute of Thanksgiving on Thursday. Both sisters ran to get their computers at 11:45pm that night in anticipation of midnight, but we soon realized that it was already midnight on the east coast and the sales had already started!!! Target didn't have their sale start until 6am, so I set my alarm! Hey, I have people to shop for, too!

It's so much fun hanging out with my sisters because we don't get to see each other very often as the live a distance away. So, when we do see each other we joke and talk about old times and gossip like a bunch of school girls... hilarious. The best part of all of it is we never get on the subject of my health. We stick to the good news... always. Even when the visited me in the hospital a month back, we just laughed and tried to lighten the mood.

I posted a picture of them above when I was in the ICU, all smiles even after hours of stress. They know how to make me laugh even in the most trying of times. For that, they're more than just family members, they're my best of friends.

Posted by smithjryan at 4:16 PM No comments: