I'm definitely stuck. The place I'm working now is in danger of going out of business. That's what we were told on my birthday.

I told Sara that the Epilepsy has gotten me to the point to when I'm working to survive and not to succeed in design. Like working for a paycheck to pay for having it because it's so expensive. I just don't think this is right. I should be able to buy a house, or save for my wedding without having a separate account for medical bills.

Sara talked to a woman from the Epilepsy Foundation about my rights as an employee for when I apply for a new job or when I get a new job. I hope it won't be complicated. I hope I just go to work like everyone else. I just want to wake up in the morning, get on a train for the city, do good work that I enjoy and come home satisfied and paid enough to support my life.
Posted by smithjryan at 9:09 AM No comments:

"Do you believe in God?"

From September 2008 until January 2009 I was on a drug called Keppra. It's obviously a very strong seizure medication that has serious side effects. My side effects: suicidal thoughts, violent outbursts, panic attacks...

One morning I was on the phone with Sara about whether or not we were going to my parents house on a particular weekend and I had an outburst and punched a door and broke my hand. I was in a cast for a month.

No closed doors. Don't block the door. I need to be able to get out or I'd make fists.

If I don't know you or if I just met you I treat you like a little kid would treat a stranger. No handshakes, standing behind Sara for "protection".

Then it happened. Sara and I started arguing about my behavior. I ran down the hallway and ran my head into the bathroom door, again, again, again. I got on my hand and knees and crawled into our room growling and drooling, not knowing if I was bleeding from hitting my head on the door. I laid half on the bed and half on the floor. I was drooling anymore, just foaming and gargling, screaming words not even I could understand. Sara stood over me obviously trying to make sure I didn't hurt myself. This lasted for at least a half and hour. Once I calm down. She got me ready for the drive to the emergency room at Loyola.

My face was sunken in, eyes glazed, I wanted to die. We walked in and as soon as I saw people and the room I couldn't handle it. They brought me in, strapped me down into a gurney while I had another growling drooling episode. I arched my back, I screamed for Sara. They put me in a white room with a gown and closed the metal door that had a little window about 12 inches by 12 inches. I stood and stared. They opened the door, inserted an IV and pumped me with drugs.

They put me on another gurney and wheeled me into a room with curtains and told Sara they were going to look for a place for me at one of the mental health facilities. It got late so Sara reluctantly went home and I slept, drugged on a gurney.

We're on the west side of Chicago in the emergency room so there was bound to be some scary things coming in. Not long I heard a very drunk man cussing (F*** your mother!) out the entire staff... they put him in the white room. There was a shooting or something so people were being rushed in and I saw the mop come out for the blood. Then next to my room there was a man coming down off meth. He had overdosed or something. They were giving him some kind of drug to counteract the meth. He moaned, he fought, he cussed. These same events happened all night. I kept hearing them say my name when they were calling different mental facilities.

The next morning the side effects had subsided and I wanted to leave. I was scared. My Mom showed up, Sara was there. The psychological doctors came in to examine me and they really had control of my future. If they found a place to put me and had seen fit to put me there, they could. I told them I was fine and it was a side-effect to my medication. They brushed that off immediately like I was making it up. "No, no, Keppra!" Nothing. Then I brought out the big guns.

"Trust me, it's a side effect to my medication. I would never do anything to hurt myself. I want to live. I love my life, I love my family, I love my God. Please!"

They let me go. I still think to this day, "I love my God", where did that come from? Was that just something I said to get out of "jail"? I've never publicly talked divinity and Epilepsy. Why then? Was it the blood, meth addict, white room? I'm not at all religious but someone or something got me through that night.
Posted by smithjryan at 5:00 PM No comments:

I switched the new Vimpat medication to 150mg this morning and I could barely stand the double vision was so bad. I’m now on three seizure medications: Topamax, Lamictal and Vimpat. All very strong medications with they’re own side effects but Vimpat is killing my eyes. I called my nurse and she’s moving around when I take the medication. Instead of 8am and 8pm, I’m spreading it out all day. Great, I get to bring my pills to work!
Posted by smithjryan at 3:48 PM No comments:

Let me explain why I named this blog "Management".

The word, for me, is a strong one. It's been a big part of my life. We manage our schedules around doctor appointments that have now broken into my vacation days at work, doses of medicine and exact times on which I should take them, the half a dozen side-effects of the medication (cross-eye feeling, rash, hair loss, kidney stones, psych probs), car pooling, average of 1-2 seizures a week....

But, I'm sure people with kids or with really busy lives could rattle off much more stressful things that they deal with on a daily basis.

I'm managing. When I think about where my life is right now there are a lot of doors that are closed. I'm not looking for a pity party but now I'm basically writing for myself. Imagine not knowing minute by minute if you'll still be conscious. There's a depression very low in me. They say it's "common in Epilepsy patients" and "please see a psychiatrist" or "more medication could help". Describing how I feel a million times to a psychiatrist is not going to make me better and one more pill added to the five I take now is not an option. When I say "I'm managing" I'm saying this with my head up but with a shaky voice.

I have a strong will. My brain is broken, but my heart is definitely strong.
Posted by smithjryan at 5:09 PM No comments: 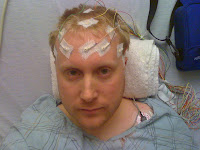 This is a picture of me during my last EEG. They hook up wires to your head to measure the brain while you have a seizure. In the photo you can see they gave me a really crappy gown in the emergency room, but I asked for a nice one after they hooked me up :). The experience is very odd. It's like having a long ponytail-leash. You ring the nurse to go to the bathroom (or go in a bed urinal) and the nurse knocks on the door every minute to see if your okay. All along you have a looong cord from your head to the macine across the room.
There's a screen behind the bed monitoring every move my head makes, literally every blink. It looks like a digital version of the needles on a lie detector test. It's kind of cool to watch. I'd find myself opening and closing my mouth, raising my eyebrows, etc... just to see the "needles" move rapidly.


In the room they put pads on the bed rails so I don't hurt myself when I have a seizure. They're embarressing for some reason, like a kid bowling with the bumpers. I can't quit understand why I feel this way. I also get a little button to push when I start feeling a seizure coming. For me words start looking like a foreign language and I get tunnel vision. I push the button and it's lights out. When I wake up I don't know who I am or what happened. The nurses ask me questions like do you know where you are? What your name? Where are you? I can't speak and I don't know the answers, but I do remember the event later that's why I can tell you the story now.
Once the doctors have their results I'm released with a huge bill and a headache that lasts for days. I get small answers and a new mix of medication. One EEG worked and one didn't... I'm 1 and 1. Shit. 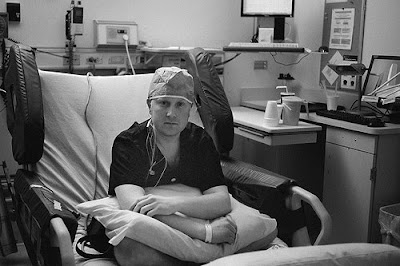 Posted by smithjryan at 2:14 PM No comments: