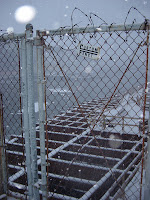 In college, I used one of my elective courses to explore an independent study with my instructor Dale Shidler. It was really my first attempt as a writer and as a photographer. Basically, I shot photos from around the Third Ward in Milwaukee on a snowy day and graphically designed my words onto the photograph. One of the photos is shown here; I have all of my finished work on a disk somewhere and I'll share those once they're located.

I think Dale might've been a little confused as to what exactly I was writing about because they were a little abstract, and I have to admit they were a little abstract in my mind, as well. I couldn't quite articulate what I was trying to say into words. I did come away with something though. The independent study never left me, I have thought about it for the last ten years and have obviously used it in many forms since then.

**Seizure** Apparently, this subject has gotten my brain all worked up!

As I was saying, I started writing this blog in 2010 but I've kept handwritten journals since college. It wasn't until I had my first seizure that my words had actually made sense in my mind. I was saying something, I was communicating, I had an audience.

Dale was my first audience member. The independent study is where I was first challenged as a writer and every piece I've written since then I've gained more and more confidence. Hopefully, in the days, weeks, and years to come my understanding of my thoughts will grow along with those of you who wish to read my words.
Posted by smithjryan at 4:17 PM