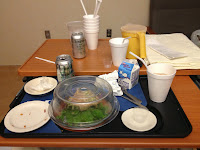 When I was in the hospital ICU a couple weeks ago for meningitis, this was what was left of my dinner. A tuna salad wrap with peaches and angel food cake. I took what I could get at that point so I couldn't complain, but once Sara and my sisters returned from Jenni's birthday dinner, (yes, she's a saint by spending her birthday with her bro in the hospital!), they asked if I wanted anything from the cafeteria. I said "HAMBURGER!" They chuckled and obliged.

The thing about me, is I love Northwestern's cafeteria, it's better than one would think. Hopefully, you're never there, but if you are, try it and you'll be forced to agree. Anyway, the kitchen was closing and so the cook had to re-heat a burger from earlier in the night so it was a little dry, but it was one of the best burgers I've ever had!

They brought me a banana and some baked chips as a side dish and I got all emotional. What an experience. I had two dinners that night, I deserved it after only eating a turkey sandwich the day before. They keep extra sandwiches in the fridge at the nurses stations, those are actually pretty good, too. Deli-style turkey, none of that slimy crap. I should be a food critic, I'm looking at you Todd!

Yesterday, I had my third treatment of IVIG. It was a horrible experience. Just working with the nurse who didn't understand that I was put in the ICU last time because she ran the IV too fast and, of course, she ran it too fast again. I didn't have the same side-effects this time, though. See, the thing with IVIG is that because it's a blood product from all of you kind donors, each dose is very different with different side effcts. Yesterday, I just had a mild, caffeine-like headache... NOTHING like two weeks ago. I drank my weight in energy drinks to hydrate and slept as much as I could, given the amount of pre-meds they administered to ward off any allergic reactions I may have.

Sara's been dealing with the hospital's administrative staff to deal with the nurse and her negligence, so she's obviously stressed, but I'm taking her out to sushi tonight to celebrate our third wedding anniversary, so hopefully that will calm us both down and get back to our normal routine. Routine being in our pajamas by 8pm and watching the news and laughing at our cats. I love life with her.
Posted by smithjryan at 12:05 PM